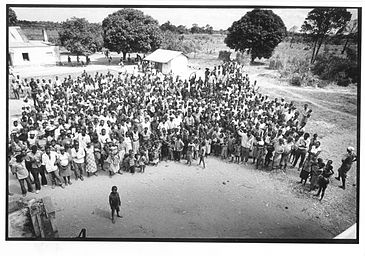 The concept of UNBOUNDED ORGANIZATION grew out of Gavin Andersson´s experience with a now half-century old, surprisingly effective, but still little-known activity called an ORGANIZATION WORKSHOP. The pioneer who created the OW was the Brazilian educator, lawyer, and activist Clodomir Santos de Morais

The participants in an ORGANIZATION WORKSHOP typically are among the poorest of the poor, among the excluded, among those society has not yet integrated into productive activity or into the enjoyment of the economic, social, cultural, political, and civil rights solemnly promised them in international covenants signed and ratified by most governments.

A large group (perhaps one hundred fifty, sometimes over a thousand) is provided with tools and invited to organize itself to contract to perform useful tasks at market wages.  (The tasks have been previously identified and “scoped” in the community where the month-long ORGANIZATON WORKSHOP is to take place. They may include for example, remodelling a run-down home for the aged, or building canals to irrigate arid land …)

The participants are also invited to request training and technical backup in skills (for example in welding) they may need to fulfil their contracts.

While being given complete freedom to organize themselves as they see fit –including organizing the kitchen where some of them will prepare meals for all of them — they are required to attend and discuss a series of lectures on THE HISTORY OF ORGANIZATION, based on and updating de Morais´ original “Notes Toward a Theory of Organization.”   The lectures begin with gatherer-hunters and end with a contemporary sketch of the functions of management : distribution of tasks, planning of work, control of performance.

Invariably the participants organize and reorganize themselves several times ACHIEVING BY TRIAL AND ERROR FORMS OF ORGANIZATION THAT ARE FUNCTIONAL FOR PERFORMING THE TASKS AT HAND.

Drawing on such on-the-ground experiences, and on wide reading –notably the reading of studies in the school of social psychology pioneered by Lev Vygotsky known as activity theory—the fecund and still-growing concept of UNBOUNDED ORGANIZATION invites us to consider GENERAL PRINCIPLES like these: